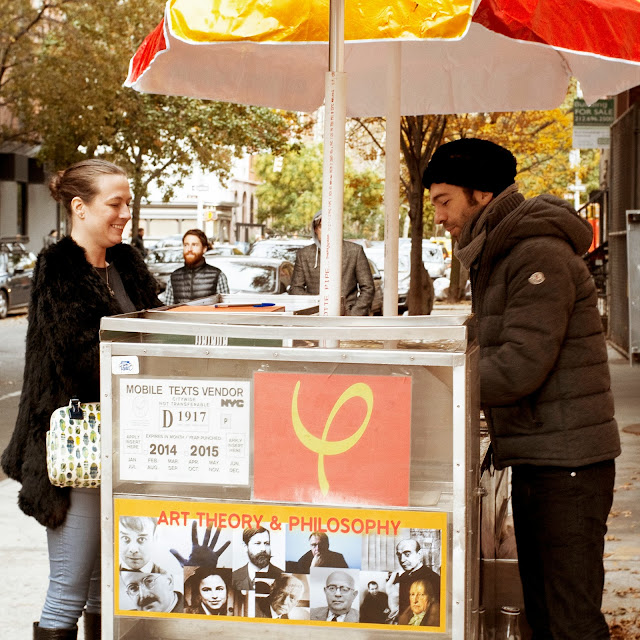 We Serve Selected Texts is a temporary public installation by Alexis Dahan that will appear in Chelsea’s gallery district November 1–23, 2013 on 21st and 22nd Street. Appropriating the iconography and rituals of the American hot dog cart, the installation invites the audience to participate in the exchange of commerce and ideas by purchasing a curated selection of philosophical and theoretical texts from a customized menu of offerings. The non-profit installation was made possible with the help of Anonymous Star Project Space.

From Claes Oldenburg’s “The Store” (1961) to David Hammons’s “Bliz-aard Ball Sale” (1983), Rirkrit Tiravanija’s “pad thai” (1990) and beyond, artists have incorporated elements of commodity culture, engaging audiences in public spaces and using everyday commercial transactions to raise questions about art, value, and authorship. With “We Serve Selected Texts,” Dahan points to the exchange of ideas within the all-American fast-food culture by utilizing the iconic New York hot dog cart as its departure.

Unbeknownst to casual onlookers, the stand appears as an authentic hot dog cart, complete with two canvas umbrellas, vendor permit, full menu, vendor and flashy advertising posters. In a variation of the Situationist tradition of détournement, Dahan has substituted the food on the menu with a wide range of philosophical and art historical text excerpts. The cart’s branding and visuals now promotes “Art Theory & Philosophy”, listing the authors’ names and simple slogans.

The selected philosophers were chosen for their devotion to the understanding of Art and the artists were selected for their longstanding relationship to philosophy. The viewer is then invited to select a writer or text from the menu; and for $1, he or she will receive a uniquely stamped scroll of hand-made Japanese paper with the selected text. By paying for the printed text, the viewer has the choice to either discard it (as one would a hot dog wrapping) or to savor and collect it, giving the piece as intrinsic value as a precious object.

Offering both “heavy” and “light” menu options, Dahan allows the audience to create a well-balanced diet of ingredients. Much in the same way that fast food does not offer a complete diet, this updated “menu” is by no means intended as a complete canon of philosophical thought nor a representation of each writer’s complete body of work. Rather, each text offers a dialogue about a certain element of the whole installation, from the way it appears to its specific location.

These bridged texts are given an imaginary title – each now standing on its own, re-contextualized for public consumption. The texts are in dialogue, referencing the nature of art production and art reception, as well as the viability of the installation itself.

“We Serve Selected Texts” is organized as a self-sustaining, non-profit operation, engaging with the system of capital in the most transparent way. Every dollar raised goes to the sales attendant and general upkeep of the stand: a playful gesture, a provocation, and hopefully, a forum for discussion. Results from this exercise will be compiled in a publication to be released in 2014.

Thank you and come again!

A native of Paris (b.1982), Alexis Dahan has lived and worked in New York since 2005. Dahan became German painter Hermann Amann’s assistant at age 20 while studying literature and philosophy in Paris and Siena, Italy. In 2007, he opened a studio in Union Square where he organized French artist Laurent Grasso’s first US show entitled “Electric Palace.” In 2012, Dahan was the subject of an acclaimed solo exhibitions “The Lover’s Body Parts are Separated” (2012) at Half Gallery, New York, and “The Sky Is Shaped By Its City Buildings” (2013) at Rook & Raven Gallery, London. He will present new work as part of a group exhibition at Dickinson Gallery, New York, to open December 17th, 2013.